Celebrating 25 years of Toxics Use Reduction

A recognition ceremony and site tour were held at facilities in March and April 2015 showcasing areas of accomplishment, including switching to safer materials and conserving energy while saving money. 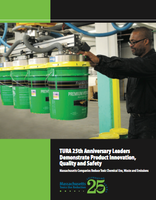